Bulging with muscles, this fierce fighter and his hefty axe is able to carve through swaths of monsters, cleaving through evil with naught but a sharp axe and mighty thews. He's one of the four original characters and continues to participate in even the latest adventures. His strength is typically offset by slow speed and abysmal magic power. The Warrior belongs in the front of any given fray, and should forego Bomb Potions in favor of, well, anyone else in the party.

The Warrior is called Thor here.

Thor is big and powerful. He moves slowly, and his big battle axe flies slowly. The axe does a lot of damage to the enemy. He has pretty good armor and excellent hand-to-hand fighting power. He has very little magic ability. His big axe will not shoot through the narrow sections of diagonal walls like the other characters.

The Warrior is a choice for those wanting a challenge. He's relatively slow, has low magic, and his shots can't fly through diagonal gaps. Strangely, his maximum health ends up being lower than all of the other characters.

His Beast Within alter-ego is the Minotaur. The Warrior hails from the Mountain Kingdom.

Red Warrior: A "typical" barbarian, with long blond hair and a red loincloth and accessories.

Blue Warrior: He looks like a European knight, but is bare-chested. He has scaled sleeves and his hair is brown. In addition to his loincloth, which now has no skull on it, he has tight blue pants.

Green Warrior: He is a much darker version of the warrior. He looks pretty much the same as the Red Warrior but his hair is brown, the red on his outfit is green, and he has an eyepatch. He has a tattoo on his arm.

Yellow Warrior: He is in yellow wraps and bandages, and has black braided hair.

He is slightly more skilled in speed than the Dwarf, but otherwise shares many of the same strengths and weaknesses.

A warrior, by the name of Athalbrandr, was one of the four immortals who loyally served their king until the betrayal of The Six.

The Warrior is known as Orlando here.

animated GIF of the Warrior's intro from Gauntlet Legends

animated GIF of the Warrior's intro from Gauntlet Dark Legacy

Minotaur screenshot, the alternate character of the Warrior in Gauntlet Dark Legacy 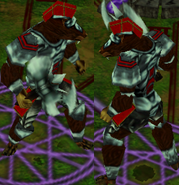 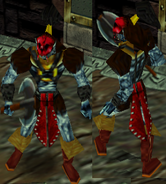