The Valkyrie is a core character in the Gauntlet series. She possesses the highest armor class and is otherwise a balanced character.

The Valkyrie first appears in the original Gauntlet and was introduced as Thyra. She was blond with fair skin and clad in blue armor. She wielded a sword and shield and threw daggers. Thyra was a solid character choice, but with weak shot power and mediocre magic.

Thyra is a well-balanced character with good abilities in all the areas. She has the strongest armor and takes the least damage from attacking enemies.

When Gauntlet: Legends was released in 1998, the Valkyrie was featured as one of the four characters again. In this version, the Valkyrie was not given a name, though if the player did not choose a name for her, the name "Freyja" would be automatically put in. Her Beast Within is the Falconess. True to previous incarnations, the Valkyrie's melee ability is far better than her ranged attacks. Closing to melee quickly is her best offensive tactic, as her relatively high armor class keeps her protected.

Like the other characters in Gauntlet: Legends, her appearance changes with her designated color.

Gauntlet: Dark Legacy was an update to Gauntlet: Legends and no major changes were made to the Valkyrie, but she is comparable to the Knight. Her Turbo Attacks and melee combinations are lightning-based.

Leaping into the air, the Valkyrie performs an energy-enhanced spinning slash.

Valkyrie fires an arrow shaped beam of divine energy that obliterates everything in its path.

In this edition, the Valkyrie is redesigned again. She is given short blond hair, and a red two piece outfit. In the instruction manual, she is given the name "Ragneithur".

Gauntlet: Seven Sorrows focuses more on story than any other Gauntlet game in the past. Each of the characters have a background story. The four characters are immortal, and are very old in the game's setting (despite their appearance).

Ragneithur was born on Northís three hundred years before the start of the game. In her homeland, they train Valkyries to be guardians to selected warriors. Ragneithur was assigned to protect Athalbrandr (the Warrior) by the Winter Queen of Northís. Like herself, Athalbrandr was also one of the Immortals (Ragneithur was the only Valkyrie to ever be an Immortal). She served the Empire with undying loyalty before being betrayed.

She found a peaceful home in the Castle Realm of Sumner's Towers many years ago, until corrupted by Skorne. Fighting valiantly with the other heroes, they eventually killed Garm and all of Skorne's monsters.

Leaving Sumner's Tower, she went under a new name and travelled with the Wizard and the Warrior to kill the Seven Sorrows.

In the book written by Richard C. White, the Valkyrie is based on her Gauntlet: Legends and Gauntlet: Dark Legacy design. She is given the name "Layla". She is rational and prefers to plan things out (due to this she gets in many arguments with Orlando the Warrior).

The Valkyries are demi-goddesses, who are priestess of Odin and choose the warriors that will enter Valhalla. They supposedly would be seen by men who were going to die in battle. They wore armor, when in Midgard (our world), but in Valhalla and Asgard wore dresses.

The Valkyrie in the first Gauntlet game was named Thyra, who seems to be named after a real life historical figure from 10th century Denmark who led an army against germans http://en.wikipedia.org/wiki/Thyra .

Render of Valkyrie from Gauntlet Legends 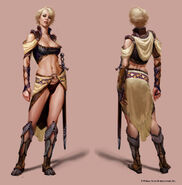 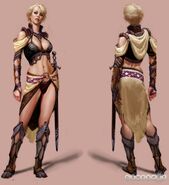