"You'll never defeat my guardian!"
- Skorne's taunt when the hero(s) fail to obtain the legendary item. The evil demon Skorne is a powerful evil only controlled by someone who has all the thirteen Runestones. He is the main antagonist of both Gauntlet: Legends and Dark Legacy, serving as a final boss of Legend and the "first" final boss of Dark Legacy before Garm.

Skorne is a large, imposing creature with a demonic form. His skin is blackened and charred, of a purplish hue with cracks that seem to belie magma underneath. He possesses bat-like wings that are severely ripped. Spikes adorn his shoulders. His face, body, and arms are armored.

He was once summoned by Garm, who was a foolish young mage at the time, but killed Garm, as he only had twelve of the thirteen runestones, with the thirteenth needed to control the demon. He crushed Garm, instantly killing him and sending his soul to the Underworld, from which Skorne came from. Later, Sumner found Skorne in his tower, and the two battled, until Skorne gave up, and went to the Desecrated Temple. Skorne then sealed off the entrance to the temple, hid the Shards with powerful guardians, and wreaked much havoc on its inside. He imprisoned himself in one room, and stayed there, constantly trying to break into Sumner's Tower with his mind. The player must fight him once in the temple when he wears his armour, and then he is sent to the Underworld. When the player has 12 runestones, a portal opens to the Underworld, where they must eventually challenge Skorne in one final showdown. When he is defeated, his powers are absorbed by Sumner's brother Garm.

Skorne is a powerful demon and the ruler of the Underworld. He possesses super strength, endurance, is a powerful magic user, can shoot poison and electric spheres form his hands, and also can burst a fire blast through his mouth. He can also smash the ground that can hit the player wherever they are along with a shockwave. He can travel to many dimensions such as the eight Realms. He supplies Generators to produce an unlimited army of his minions. In the underworld, he is known as True Skorne and his powers are increased and become more fire based along with replacing old attacks with new ones like shooting out fire darts in a wide arc and shooting a powerful energy blast in two different forms that comes from his stomach. 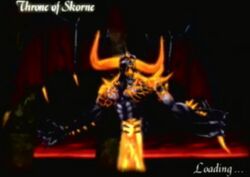 True Skorne is the second form of Skorne. He is shown as he was before, without any armor, showing his (ugly) face. He appears past the gates of the Underworld.

Community content is available under CC-BY-SA unless otherwise noted.
Advertisement