For ages, fool-hardy adventurers have been lured by promises of countless treasures in the depths of the Gauntlet, yet none have ever made it out alive. The corrupt wizard Morak conjures minions and devious traps against would-be champions and taunts them all along the way. But a new group of heroes looks to succeed where all others have failed.

Warrior, Valkyrie, Wizard, and Elf – each has their own reason for entering the Gauntlet but all four are bound together for one goal: to survive the Gauntlet and claim the ultimate prize!

Hordes of monsters, powerful bosses, devious traps and even Death itself stand in between you and claiming the Gauntlet’s treasures. But your biggest challenge may come from the allies who stand beside you as the heroes are competing for the riches found within.

Try to turn the odds in your favor by equipping yourself with powerful relics found within the Gauntlet. Will these magical Relics protect you and your party from danger or will they just get you into even more trouble?

Add a photo to this gallery 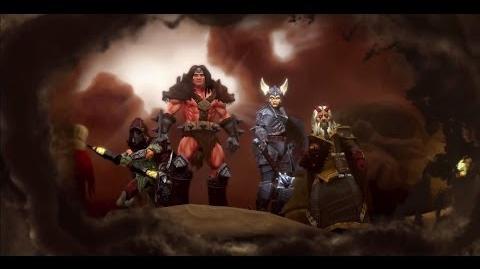 Gauntlet - Gear Up For Battle Trailer 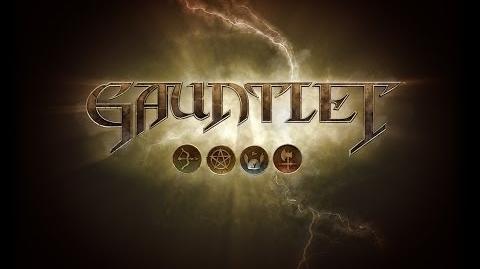 Official Gauntlet Announcement Trailer
Add a photo to this gallery

Retrieved from "https://gauntlet.fandom.com/wiki/Gauntlet_(2014)?oldid=5136"
Community content is available under CC-BY-SA unless otherwise noted.