Gauntlet: Legends was released as an arcade game in 1998, was ported to the Nintendo 64 in 1999, and ported again to the PlayStation and Dreamcast in 2000. Now presented with 3D graphics and with several new monsters, items, and worlds, this game included an storyline involving the wizard Sumner and his demon-summoning brother, Garm.

Sumner's brother Garm releases Skorne from the Underworld. Sumner has summoned the four mighty heroes (a warrior, a valkyrie, a wizard, and an archer) to stop Skorne from taking over the land. They must travel to the four realms of the land and free them from Skorne's four guardians. Once the guardians are destroyed, their keys unlock a desecrated temple, where the heroes battle Skorne. After facing defeat, however, Skorne flees back to the Underworld. The heroes must then find the 13 runestones that will open the Underworld, where they face Skorne again and destroy him for good.

The top-down, 3/4 viewpoint from the original game has returned, but now in a 3D environment. Though the core Gauntlet gameplay remains more or less intact, players now have more options available to them. Characters now have a Turbo Attack which recharges over time and can be used to eliminate large amounts of enemies.

Three of the four characters from the previous titles return. The Elf has been replaced by the Archer.

Each character has a Beast Within, that can be unlocked in the arcade by reaching a certain level, and in the console versions by collecting Coins in Treasure Rooms.

Consumables are items that are either used immediately, or have a singular, passive, purpose.

Starting the trend for future installments, monsters come in three levels of strength and are spawned by monster generators. Destroying these generators is a primary goal of the game, and essential for stopping the flood of monsters.

Gauntlet: Legends has been ported to three different systems, each with their own variation of the original Arcade version, having slightly different graphics, stage layout (and different stages altogether), and different available items. The game's engine can be different between versions as well, as most dramatically seen between the PlayStation and the Dreamcast versions.

This was the first console version of the game, released on September 28th 1999.

This game introduced an inventory system that allowed players to stock and activate items after they were obtained, with a few exceptions (Invulnerability and Anti-Death Halo). This is also the first Gauntlet game to feature Sumner's tower and his shop.

This version is often criticized for its extreme diversity from the original arcade version. Most of the levels have been down-sized, many objects features buggy physics, and lack of four-player cooperative gave the port relatively bad ratings. The game retains the inventory system from the Nintendo 64 version, the two new realms, and extensive cheat codes.

The third and final console version of the game, released on June 6th 2000.

This version is most notable for being a near-direct arcade port. The four Realms from the arcade version are included, however some of the levels were completely redone. A new physics engine was used, and some of the soundtracks were remixed.

Like the arcade version, there is no inventory. The player can only access the shop after completing a level. Special items are used on a time limit, which is slightly longer than the arcade version. The game is often criticized for not allowing players to buy food at the shop.

This port includes many features from Gauntlet: Dark Legacy. The 8 new character classes are playable here. The Poisoned Fields is included as the first level in the Castle Stronghold. The Mausoleum is also accessed from a secret passage in the Castle Courtyard.

The DreamCast version includes the four characters from Dark Legacy:

Contest shirt, only 500 were awarded 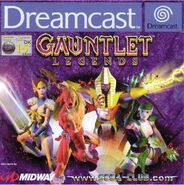 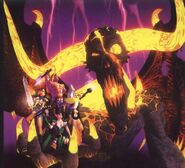 Super secret nude code for blue valkyrie, initials NUD and password 069. Unfortunately, there are censorbars everywhere including her eyes
Community content is available under CC-BY-SA unless otherwise noted.
Advertisement