Gauntlet was released in 1985 by Atari Games for arcades. It was one of the first hack-and-slash dungeon-crawler games constructed. The game emphasized multiplayer involvement, and up to four could play at any given time. In addition to the plethora of items and monsters, there was an announcer, akin to Dungeons & Dragons' Dungeon Master, who would comment on the current situation, pickups, and the like. Gauntlet II came out a year later and was a vast improvement over the original.

The original Gauntlet lacked a cohesive story. The player chose a character to represent themselves, then attempted to survive as long as possible.

Players must navigate a labyrinth from a top-down, 3rd person view while their character's health slowly dwindled away. The goal is to find the exit for each room, and to survive for as long possible while doing so. Item collection is a must, both for survival and scoring. The game only had a joystick and two buttons, "Fire" and "Magic". Accessing Treasure Rooms gave a chance for a bonus and collecting extra power potions.

The four iconic characters made their debut here.

Starting the trend for future installments, monsters come in three levels of strength and are spawned by monster Generators. Destroying these generators is a primary goal of the game, and essential for stopping the flood of monsters.

Gauntlet went through many updates even in the arcades. Various consoles also received exclusive special editions.

The Deeper Dungeons was an expansion pack with an additional 512 levels, only available for the personal computers of the time.

The Nintendo version of Gauntlet arrives with an actual plot and ending. The core gameplay hasn't changed, but the various floors have been rebuilt.

Gauntlet title screen, when it was remade for Xbox Live with improved graphics 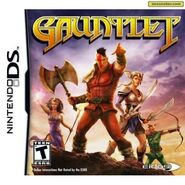 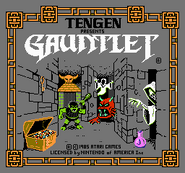