The evil brother of the Wizard Sumner, Garm once snuck into his brother Sumner's tower out of jealousy as Sumner was seen as a much better mage than him. While Sumner was happily in one of his realms Garm took 12 out of 13 runestones to try and conjure something he could use to his control. Garm, using the twelve Runestones, released Skorne, not knowing the demon could only be controlled by all thirteen runestones. So the foolish Garm was crushed by Skorne and sent to the Underworld. He lived there for what seemed years, hung by his arms onto a wooden frame.

Then came the day when the Heroes of the Realms went into the Underwold and faced the demon. When Skorne died, Garm absorbed the demon's power and became a demonic version of himself. He then created an undead army in the Battlefield, and sent them to attack the area around Sumner's Tower. Garm lead the charge of his undead army from in his citadel, and that is the place in which he must be destroyed.

Garm was an inexperienced wizard that could be as powerful - if not stronger - than Sumner, but no one would know for sure. After absorbing Skorne's power, he became incredibly powerful to the point of creating a vast undead army in a matter of days (if not hours) and was already attacking Sumner's Tower after gaining such power during the Feast of Victory.

In battle, he is able to throw energy spheres, shoot energy beams from his eyes, and create massive shockwaves. Since his body is a statue, pieces that have broken off in battle create two dark sorcerers identical to his alive form that can shoot energy beams and transform into flying skulls after being defeated.

When Garm is truly defeated it is revealed that Garm's mortal body is actually contained inside the statue. Once the hero has broken the statue his body will be revealed. Then a single well placed shot will end his evil for good.

Garm as a Demon 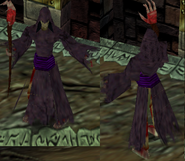 Garmr, often intertwined with Fenrir, is a dog that appears during the Twilight of the Gods in Norse mythology. Both Garmr and Tyr were meant to kill each other.

Garm's final form looks something like Unicron, a major villain in "Transformers", or Chaos from "Final Fantasy".

Community content is available under CC-BY-SA unless otherwise noted.
Advertisement